Signs of a mismanaged economy 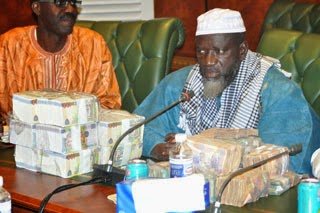 Let us hope that in 2015, the Jammeh regime will adopt a set of fiscal and monetary policies  that addresses the urgent and pressing issues facing an economy that is contracting at an alarming rate.  Ordinary Gambians are suffering unnecessarily as a result of government neglect.

Inflation is a problem that is partially being fueled by government that is spending scarce resources in expensive and non-productive projects.  State-sponsored celebrations should stop, 5-day workweek restored and domestic borrowing limited to the essentials to bring the deficit under control.

Transparency in the budget process must be reintroduced, including a staff audit of the civil and public services, starting with the security forces.

While the reestablishment of the Major Tenders Board is welcomed, we were shocked to learn that it had been abolished thus rendering the tender process opaque, partial and expensive.  What other institutional safeguards have been dismantled without the knowledge of the general public?

Gambians are currently suffering as a result of the high cost of living due to price inflation.  Basic commodities are now priced beyond the reach of ordinary citizens while the 0.02% of Banjul-based plutocrats are disproportionally benefiting
from deliberately skewed government policies.  This unbalanced "growth" is contributing to the contraction of the economy that has been sapped of the purchasing power of the "middle class" ( for lack of a better classification) whose wages have stagnated for 20 years.

No wonder, one in every Gambians can no longer afford three square meals a day and over 200,000 Gambian children are hungry and malnourished.  There is an outbreak of kotishoka, a disease caused by hunger and malnutrition, among children in CRR children.  Urgent attention to their plight is required to help supplement the interventions of NGOs in the area.