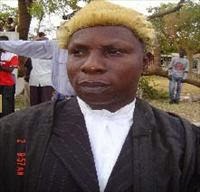 The Gambian dictator has appointed a Nigerian as Acting Chief Justice of The Gambia, the third person to hold the position in a little over 6 months.  Justice Emmanuel Fagbenle replaces Ghanaian born former Chief Justice Mabel Agyemang who was sacked, and the one before her is serving jail time for abuse of office.

Justice Emmanuel Fagbenle appears to have initially entered the Gambian judiciary as a Nigerian technical assistance.  He later secured a Gambia government contract, as most mercenary judges employed by Yaya Jammeh.

According to statement issued by the Office of the President, Justice Fagbenle is being appointed as "acting Chief Justice" to replace Ghanaian born Mabel Agyemang who "was relieved of her appointment" without explanation last Monday.

The official statement announcing Justice Fagbenle's appointment gave no biographical detail, and a search provided little by way of background of Gambia's new Acting Chief Justice of the Supreme Court.  One would expect a detailed resume that includes his professional experience, positions held, writings, memberships in legal organizations and the like.  The only record we have shows that he was appointed Appeals Court judge five years ago, and nothing else.  This is obviously a cause for concern.

This blog will continue to follow developments in the Gambian judiciary which is in a pathetic state, and an embarrassment to legal profession and to the Gambia judiciary alike.  We will liaise with the international legal bodies regarding the professional behavior of this caliber of judges who receive instructions from the Gambian dictator.  These judges serve the dictatorship, and not justice.
Posted by Sidi Sanneh at 6:35 PM