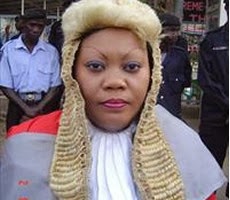 Justice Agyemang became the second Ghanaian Chief Justice of The Gambia after a tumultuous year for the Gambian judiciary which saw the sacking of the Nigerian-born of the Acting Chief Justice Wowo who was previously arrested and remanded in prison for providing false information to a public officer.  The embattled Nigerian mercenary judge who fell afoul of the dictates of Yaya Jammeh has since been found guilty and sentenced to two years in prison for abuse of office, conspiracy to defeat justice and interference with witnesses, among a litany of other charges.  Former Justice Minister was found guilty of similar charges and received a similar sentence.

The dictator continued his sermon with the following words to the audience and the nation "I want to make sure my conscience is clear whenever somebody is sent to jail, and I want to make sure that when someone has to face the ultimate penalty for the ultimate crime he/she has committed, I would go to bed easily knowing that justice has been done."

Justice Agyemang was called to the Ghanaian Bar in 1987.  She worked under contract with the Commonwealth Secretariat as an expert judge in 2004 in The Gambia for a period of four years before moving on to Swaziland.   She returned to The Gambia in 2010 as an Appeals Court Judge, still under Commonwealth Secretariat contract before being elevated to the highest judicial position in The Gambia.

It is unclear at this point whether she was still under contract with the Commonwealth Secretariat when she became the Chief Justice, and if so, whether her contract status changed after the dictator's unilateral decision to withdraw Gambia's membership from the Commonwealth.