Gambia is a criminal enterprise, and Jammeh should assume personal responsibility 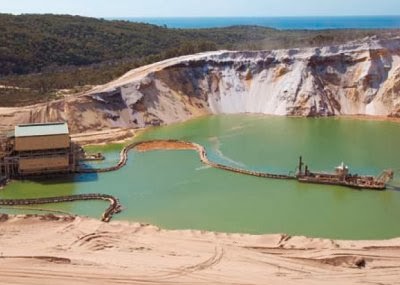 We learned today that one of Jammeh's multitude of former Foreign Ministers, Mambury Njie, has been charged with "neglect of office" and hauled before a magistrate at the Banjul Magistrate's Court.  Mr. Njie, who has been out of a job for a couple of years and cannot travel out of the country because his travel documents have been seized, is being accused of negligence of duty.  Despite the seizure of his passport and the fact that the courts had granted him bail, he is being held at the Burusibi police station, contrary to law.

According to the charge sheet, the regime of Yaya Jammeh has finally come to realize, after 13 years, that Mambury Njie was a negligent officer for failing to advise government properly before a mining concession contract was signed in 2001 between an Australian mining concern, Carnegie Mining, and the Gambia government.

Carnegie an AIM quoted company is a sand mining concern that entered into a 50-50 joint venture agreement with another Chinese mining concern who were engaged in the development of a zircon/rutile mine in The Gambia in 2002.  It was not until in January 2008, six years into its mining concession in The Gambia that the company received a letter from government requesting Carnegie to cease all operations "pending receipt of certain information in relations to its minerals mined and laboratory results."

The government proceeded to give Carnegie 24-hours ultimatum to come clean or face losing its license to operate in The Gambia.  This order was issued by Yaya Jammeh as the country's Minister (at the time called the Secretary of State) for Mineral Resources.  Jammeh accused Carnegie of concealing the actual minerals being mined, and proceeded to arrest and detained the Managing Director of the company.

We have written extensively on this issue, and those who want some of the details, including arbitration actions taken by Carnegie Minerals, can be found here : http://sidisanneh.blogspot.com/2014/01/carnegie-minerals-falls-victim-of.html

The charging of the former Secretary General with negligence of duty is the latest bizarre action by an embattled government that has obviously lost its way in the face of mounting public pressure resulting from the regime's incompetence and high level corruption.  This regime lacks all moral authority to judge anyone because the regime itself is rotten to the core and needs to be uprooted.. 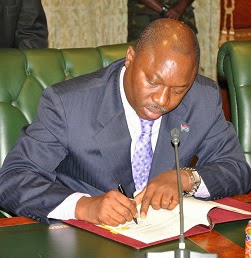 It is to be recalled that as recently as January 2014, another bizarre twist to the Carnegie saga took place when a Cameroonian-born judge of the Special Criminal Court named Emmanuel Nkea surprised everyone but Yaya Jammeh by convening his Court to announce that he's found Carnegie guilty of mining uranium and iron on the sandy beaches of Sanyang village.  The judge proceeded to pronounce to an empty court that he has fined Carnegie $ 200 million.  This was at a time that Carnegie's case was, and still is in arbitration before the World Bank's International Center for Settlement of Investment Disputes (ICSID), a court action we considered a preemptive move on the part of the Jammeh regime.

After delivering his bizarre judgement, Special Criminal Court Judge Emmanuel Nkea went missing only to resurface two weeks later to tender his resignation in absentia - the letter hand delivered by an acquaint.  The judge had already fled the territory.  It is conceivable that Justice Nkea's fleeing the scene of the crime may be related to the Mambury Njie's case.

It is tempting to draw parallels between this case and the one involving the Financial Director and Managing Director of the Gambia Ports Authority (GPA) who were both acquitted and discharged by pleading no case to answer.  The two were also charged with negligence of duty when it was proven the power rested with the Task Force created by and operated from the Office of the President.

Similarly, the Ministry of Mineral resources is under the Office of the President with the President as the Minister for Mineral Resources.  It is public knowledge that the mineral resource portfolio is one of the most secretive Ministries, and thus the least known.  In fact, the public knew nothing about it until heavy duty lorries were seen transporting stuff to the ports for export, and they start speculating beofre they started asking questions.

The Carnegie deal, like the petroleum contracts Jammeh has signed with African Petroleum (Gambia) Limited, Buried Hill (Gambia) BV and Oranto Petroleum, was negotiated and sealed in secret with usually only Jammeh and his Secretary General privy to the details.  He now has a Petroleum Minister who was sacked and reinstated in a span of 24 hours.  The Minister is effectively a hostage of a criminal enterprise because she knows too much.  The entire episode has become a theater of the absurd

It is time for Yaya Jammeh to take full responsibility for his incompetence, and for being the head of a criminal enterprise that characterized his A(F)PRC regime instead of putting the blame elsewhere, always.
Posted by Sidi Sanneh at 12:56 PM