How Zainab is helping destroy the Gambian economy 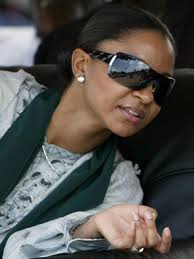 Yaya Jammeh may be the main culprit but his Morocco-born wife, Zainab Jammeh, is a significant contributor to Gambia's deteriorating economic environment.

Her jet-setting lifestyle is proving to be the bane of Gambia's dwindling foreign reserves because of her insatiable taste for luxury goods and high-end living that rivals the Hollywood starlet.  Her lifestyle requires foreign exchange which is in short supply for a number of years.  But that doesn't deter her from demanding for more from her dictator husband whose confiscatory and illegal demands from the Central Bank Governor for money is causing him sleepless nights.  The practice is so prevalent and getting worse that unconfirmed reports have it that a recent IMF mission demanded a stop to it because it bordered on criminality.

Zainab Jammeh's foreign travels are by private charter out of Dubai.at an average cost of US $ 200,000 per trip according to our sources.  At an average of one trip a month for a minimum of couple of weeks per trip, her hotel bill alone at her favorite hotel suite in McLean, Virginia, a presidential suite can cost the public treasury upward of $ 40,000  - $ 50,000.  In short, a trip by Gambia's First Lady can cost $ 1,000,000 to $ 1,500,000.  Although she and her husband own a $ 3.5 million mansion outside Washington DC, they have abandoned it because of the Gambian protesters they attract anytime they try living in it.

Mrs. Jammeh is not totally oblivious to the fact that the country's dwindling foreign reserves.  She recognizes the difficulty her husband encounters in providing the foreign currency needed that forces him to demand local currency - which will always be in abundant supply as long as there's enough supply of ink and paper - from the Central Bank to be converted in dollars by Trust Bank, a government-controlled commercial bank.  The First Lady's response to the new normal is to establish a number of "Foundations" for child health and cancer for the sole purpose of soliciting foreign money from the Gulf States and other Muslim countries.  She was recently in the Gulf and in Malaysia soliciting funds on behalf of her Foundation most of which, it is believed, in diverted for her personal use.

The reputation of both Yaya and Zainab Jammeh abroad is nothing to write home about and thus will limit their capacity to raise huge sums of money.  It is, therefore, expected that while Mrs. Jammeh's fund raising efforts may pay off in the short run, it may not be sufficient to finance the lifestyle they've come to accustomed to without dipping their hands in the public trough.  It is a sad and unfortunate fact that for as long as Jammeh is in power and the economy continues to contract, The Gambia will ill-afford the expensive the expensive lifestyles of Mr. and Mrs Yaya Jammeh.  It is time that both be retired from public life this year.
Posted by Sidi Sanneh at 7:10 PM