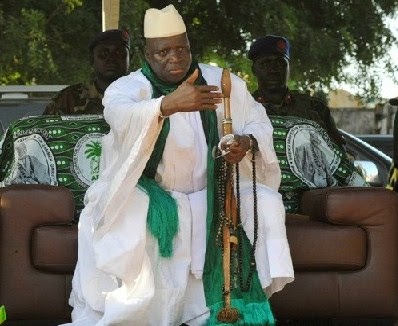 According to a breakdown of the D1.12 billion supplementary budget approved by the Gambia's National Assembly on Monday, almost half of it or D 459 million went to the Office of the President as suspected.

D 136 million of this amount went for travel expenses of Yaya Jammeh, salaries for his flight crew, their insurance cover for flying Jammeh, Zainab Jammeh and their two kids.  The amount also includes costs of air tickets for the presidential entourage that following him around the world, including "protocol girls" who act more like Jammeh's comfort girls.

The D 500,000,000 is a supplementary budget allocation in addition to that the 2014 allocation approved last December - an amount so colossal that it has started to be openly questioned in certain circles of the civil service.  When we reached a senior civil servant about the numbers, he reacted vehemently against the unbalanced and callous approach to budget appropriation process which he described as "opaque, designed to conceal the gross mismanagement of taxpayers money while enriching themselves in the process."

The Ministries of Energy and Petroleum, both under the Office of the President received a combined D 30 million extra allocation for what is unclear, while the Ministry of Agriculture received no additional resources despite all the loud talk about Vision 2016 that has promised to usher in rice self-sufficiency in a couple of years.

D 63 million and D 65 million went to the National Assembly and the Judiciary, whereas the Ministry of Justice received an additional.  These are institutions that Jammeh uses so effectively in suppressing the rights and liberties of Gambians, therefore he will ensure that resources are not a hindrance to enforcing the dictatorial powers of he regime.  In case you were wondering what additional resources the Ministry of Education received in the appropriation exercise - zero, zilch, nada.