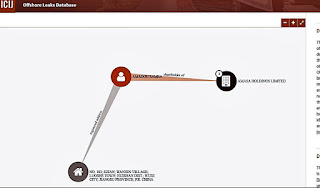 According to the Panama Papers, a number of companies registered in the Gambia have stashed almost $ 1 billion in offshore accounts.

We are studying the details in consultation with tax accountants, financial and legal experts with a view to gaining insight into this massive transfer of financial resources from one of the world's poorest countries.

We wish to draw the attention of our esteemed readers that operating offshore accounts in and of themselves may not necessarily be illegal unless it can be established that the origin or origins of these funds are as a result of illegal activities, such as drug or human trafficking or other forms of international criminal activities.

The Gambia is, of course, not the only country that is shown to have its citizens operating offshore accounts in tax heavens.  Prominent Senegalese businessmen are among those listed as operating accounts offshore.  The difference between them and the Gambian businessmen listed in their forthrightness.

The Senegalese businessmen listed in the Panama Papers were quick to respond to the revelation by explaining the rationale for these accounts which, according to one, was to legally reduce or eliminate further exposure to higher tax liabilities.  To some, this is unethical or unpatriotic.  To others it is a smart business move.  In short, one man's tax dodger is another man's astute businessman.

Amadou Samba, a Gambian businessman, a business partner and a close associate of the Gambian dictator is listed as operating one or several offshore accounts.  The amounts in one or several of these accounts are unknown.  However, the global figure for the country is listed as $ 900,000,000 a figure close to Gambia's estimated GDP of $ 1 billion.

Gambians deserve a response from both Amadou Samba and Yaya Jammeh as initial step in a process that will take the expertise of world class legal, financial and tax professionals to ascertain the facts on behalf of the Gambian People.

When Jammeh seized power, "rampant corruption" was the reason he advanced to justify the illegal coup.  A team of investigators were dispatched to comb the offshore centers in search of funds they believed were derived from the Nigeria Crude allocated to the then government as balance of payment support by the Nigerian government.  Today, the shoe is on the other foot.