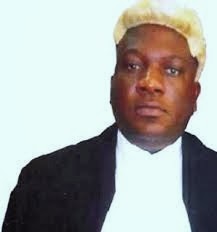 The former 'hanging judge' of the Special Criminal Court, Justice Emmanual Nkea has been declared fugitive from the law by Yaya Jammeh, the Gambian dictator.

Former Justice Nkea has been one of the most prolific dispenser of justice, the Jammeh way, until he ran afoul of the dictatorship he served and helped entrenched.

Now, he's being hunted by the same forces he helped empower using the Special Criminal Court to sentence the opposition to the dictatorship, real and imagined, to long prison sentences.

Former Justice Ngea was described by this blog last October as the "eye of the new storm" as he was tapped by the Gambian dictator to replaced the sacked Acting Chief Justice of the Supreme Court, Joseph Wowo.   He didn't last long.

Emmanuel Nkea was seen more as a political wheeler dealer than a legal luminary who was more interested in carrying out the wishes of Yaya Jammeh by locking up opponents of the regime than dispensing justice.

The Cameroonian-born judge resumed from a two-week vacation back in February this year only to resign abruptly for unspecified reason(s) - a resignation that came at the heels of the firing of the Ghanaian-born Chief Justice Mabel Agyemang who was under Commonwealth Fund for Technical Cooperation.

Given the embarrassing circumstances under which the former Special Criminal Court judge fled the country, only handing over his resignation letter to a friend just before his plane safely took off to avoid arrest, the regime had concealed the fact that the former mercenary judge is wanted by the law.

His fugitive posters have been posted in police stations across The Gambia, and presumably in Gambian Embassies abroad.  The hunter has now become the hunted.  What an irony.
Posted by Sidi Sanneh at 10:06 AM